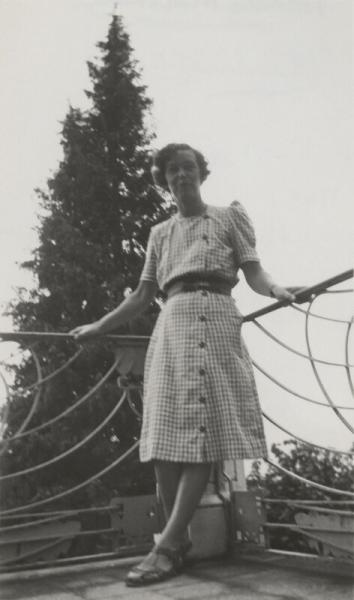 Frances Marshall attended the progressive school Bedales where she became a good friend of Julia Strachey (whose biography she would later write).  After graduating from Newnham College, Cambridge University, in 1921, Frances worked for six years (1922-1928) at David Garnett and Frankie Birrell's Bloomsbury book shop, her friendship with Julia leading to friendships with Lytton Strachey, Dora Carrington and Ralph Partridge.  Suggesting the degree to which Frances was enmeshed in Bloomsbury, her sister Ray (Rachel) Marshall married David Garnett in 1921, and her brother, Tom Marshall, later LSE sociolgist T.E. Marshall, was married to Hogarth Press employee Marjorie Thompson (Joad) from 1925 until her death in 1931. (When Ray died of cancer in 1940, David Garnett married Angelica Bell).

Frances married Ralph Partridge in 1933, after the death of his first wife (from 1921) Dora Carrington.  Frances had met Ralph while he was working for the Woolfs and she for Birrell and Garnett at 19 Taviton Square.  At this point Frances entered the already complicated Carrington/Lytton/Ralph/Gerald Brennan love triangle, which did not resolve itself until Carrington killed herself in 1932, just two months after the death from cancer of Lytton Strachey.

The only son of Ralph and Frances, Lytton (Burgo) Partridge (1935-1963), married Henrietta Garnett, daughter of Angelica Bell and David Garnett.  Burgo died quite suddenly of a heart attack when Henrietta Garnett was pregnant with their daughter, Sophie.

Frances Partridge wrote extensively about Bloomsbury.  She also translated from French and Spanish into English, including works by Asturias.