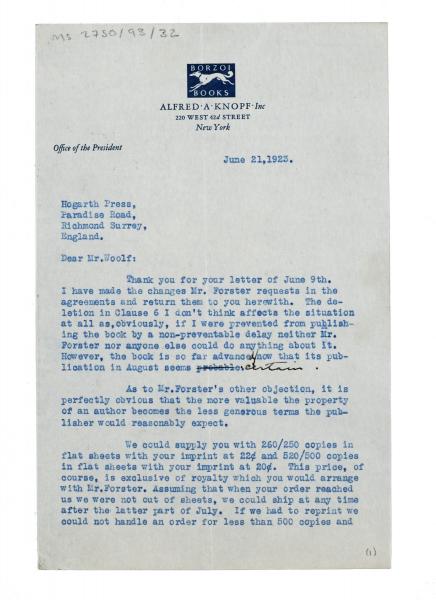 Alfred Knopf and his fiancée, Blanche Wolf, were in their early twenties when they launched the Alfred A. Knopf publishing firm in the autumn of 1915, procuring space in the midtown Manhattan office where Alfred’s father, Samuel, worked in advertising. Samuel Knopf was an initial investor and served as treasurer of the firm from 1918 until his death until 1932.[i]

Alfred Abraham Knopf completed a bachelor’s degree (generalist) at Columbia University and, after numerous rejections at an array of publishing houses, landed a job as an assistant in the accounting department at Doubleday, Page & Co.’s sprawling new complex on Long Island, followed by an apprenticeship at the literary publishing house of Mitchell Kennerley. During his courtship of Blanche, Alfred wooed the quiet bibliophile with gifts of beautifully bound editions, and with the possibility of a career pathway that would otherwise have been difficult for her to enter, as the field was dominated by men.

The field also excluded non-Christians; Harper & Brothers, Charles Scribner’s Sons, and Houghton Mifflin were among the longstanding gatekeepers of American publishing at that time, but the Knopfs, along with other Jewish publishing pioneers such as Pascal Covici, Horace Liveright, and Bennett Cerf, disrupted that power structure. Though they faced discrimination because of their Jewish heritage, Alfred and Blanche led decidedly secular lives, marrying at the St. Regis hotel in a ceremony officiated by a magistrate.[ii] Their only child, Alfred Abraham Knopf, Jr. (known as “Pat”), joined his parents’ firm in 1946 after serving in World War II, but he departed to become a co-founder of Atheneum Publishers in 1959.

Blanche and Alfred Knopf possessed keen business instincts, with an emphasis on modern marketing tactics for building a recognizable brand. Blanche quickly mastered all aspects of the book trade, from production to publicity, though she usually remained in New York while he traveled to meet with booksellers across the country. In 1918, when the firm became  incorporated, she was named vice president. It was she who proposed the Russian wolfhound, or borzoi, for the firm’s logo, and the alliterative Borzoi Books trademark was created.[iii] Rather than referring to a special imprint, the term “Borzoi Books” was a branding phrase for all books published by Knopf, and today the words “This is a Borzoi Book” continue to be printed on all Knopf copyright pages, though the phrase is no longer used in advertising.

Drawn initially by an advertising illustrator commissioned through Sam,[iv] the wolfhound logo remains in use as a prominent signal on the spines of Knopf books, expressing youthful exuberance in full gallop. The Knopfs applied the logo to endpaper designs, typographical ornaments, advertising borders, and watermarks for paper on limited editions. The Borzoi aesthetic, which sometimes included deckled paper edges and paper labels, conveyed an aura of artisanal production on a hand press, but Borzoi Books have always been industrially manufactured. The beautiful design was touted in advertising as the Knopfs’ alliances with notable graphic designers and typographers flourished, among them Elmer Adler, Bruce Rogers, William Addison Dwiggins, and Warren Chappell. Adding a colophon to the last printed page of each book (not just limited editions) provides a history of the chosen typeface and other production details, and it is a Knopf tradition that continues today.

Informed in part by Alfred’s professors at Columbia University and Blanche’s education at the Gardner School for Girls, the Knopfs initially emphasized European writers on their lists. Alfred was also mindful of the reduced financial risk of importing pre-printed books in sheets. These transatlantic arrangements were achieved in part through relationships with literary agents, particularly William and Jenny Bradley in Paris; Albert Curtis Brown, Edward Garnett, and James Brant Pinker in London; and John Quinn and Jean Wick in New York. The Knopfs also successfully expanded their influence by building partnerships directly with Mercure de France, André Gide’s Paris house; S. Fischer Verlag, the Berlin publisher of Thomas Mann; and the house of Gyldendal in Copenhagen, where they purchased the rights for books by Knut Hamsun and Sigrid Undset shortly before these authors were each awarded a Nobel Prize during the 1920s.

The inaugural Knopf list included six Russian authors, including Maxim Gorki’s Chelkash and Other Stories and Mikhail Yuryevich Lermontov’s novel A Hero of Our Time,[v] the result of Alfred’s negotiations with English publishers who also oversaw the translation process. In the UK, the Knopfs’ business relationships extended to Martin Secker (whose upstart firm Alfred sought to emulate)[vi], Jonathan Cape, and William Heinemann, whose firm provided Alfred with a desk during scouting trips.

The Hogarth Press and Knopf published many of the same authors, among them E. M. Forster, Nobel Prize winner Ivan Bunin, and the American poet John Crowe Ransom,[vii] but the overlap was not the result of a sustained, direct partnership between the two firms. For example, in the case of Forster, the Knopfs negotiated U.S. rights for Where Angels Fear to Tread, Howards End, The Longest Journey, and A Room with a View through Curtis Brown’s agency, but for the short-story collection The Celestial Omnibus, they imported sheets from the publisher Sidgwick & Jackson. For the essay collection Pharos and Pharillon, their final Forster title before the author left them for Harcourt, the Knopfs negotiated directly with Hogarth for the right to set and bind an American edition.[viii]

In 1924, Knopf, Inc. provided the financial backing to launch The American Mercury magazine and served as its publisher until 1935. Co-founded by the drama critic George Jean Nathan and satirist Henry Louis Mencken, The American Mercury featured humor writing, coverage of current events, and a book-review section that further enhanced the Knopfs’ influence. Fine printer Elmer Adler created a layout that echoed his elegant title-page designs, communicating a staid tone that belied the colorful voice of the content.[ix]

The fiction writers who appeared most frequently on Knopf’s lists during the company’s first ten years were J. S. Fletcher, Joseph Hergesheimer, and the late Guy de Maupassant, none of whom were known for being particularly experimental. Furthermore, unlike the boundary-pushing new publishers of the day, the Knopfs always refrained from testing censorship laws, even melting the plates for a novel on their inaugural list (Stanislaw Przybyszewski’s novel Homo Sapiens) when obscenity charges were brought against them and rescinding their offer to publish Radclyffe Hall’s The Well of Loneliness. That said, during the company’s first decade Knopf published a selection of modern works by D. H. Lawrence, Percy Wyndham Lewis, Dorothy Richardson, Katherine Mansfield, Edith and Osbert Sitwell, Elinor Wylie, Witter Bynner, Ezra Pound, Max Eastman, and T. S. Eliot. Knopf was the publisher of choice for Khalil Gibran and also for Carl Van Vechten, who formed a lifelong friendship with the Knopfs and led them to publish the Harlem Renaissance luminaries Langston Hughes and Nella Larsen. As described by Josh Lambert in his study “Publishing Jews at Knopf,” the representation of Jewish authors under the Borzoi mark was initially modest but grew during the second world war, particularly after Harold joined the editorial department in 1942.[x] During the 1920s, a noteworthy British import for Knopf was Gladys Bertha/Bronwyn Stern’s semiautobiographical Matriarch series, depicting the sagas of a Jewish-English family.

Though the firm did not engage in paperback publishing until 1954, when Vintage Books was launched at the urging of Pat Knopf, a foray into affordable hardcovers was attempted in 1923 with the creation of Borzoi Pocket Books, which endured into the early 1930s and were priced at approximately half the cost of a full-size Knopf hardcover with an emphasis on classics.

Blanche and Alfred also took the unusual step of entering the British book trade by launching their own publishing company in London headed by British novelist, journalist, and translator Storm Jameson. Debuting in 1926 and shuttering its doors five years later, Alfred A. Knopf, Ltd. was headquartered in the Bloomsbury district, near the publishing house of Jonathan Cape. Socially removed from the Bloomsbury set, Knopf Ltd. emphasized mainstream titles ranging from natural history and wine selection to memoirs and detective novels, including hardboiled fiction by Dashiell Hammett. Knopf Ltd. was frequently outbid for the UK rights to more lucrative American authors, some of whom (such as their own Willa Cather) were successfully being published by Knopf, Inc. in the United States.[xi] When they visited the UK as potential customers engaging in deal-making to buy U.S. rights, Blanche and Alfred had power, but it was quite another undertaking for them to attempt to sell books to directly to British readers—and to attempt to persuade American agents that Knopf Ltd. was a good choice for bringing American authors to the British marketplace.

Now past its centennial, Alfred A. Knopf, Inc. has continued to remain a prominent house with a strong reputation for excellence among agents, critics, and booksellers. With an impressive backlist, the firm counts more than thirty Nobel Prize winners on its roster (including Albert Camus, Gabriel García Márquez, and Toni Morrison), more than fifty Pulitzer Prize winners, and more than thirty National Book Award winners. Blanche and Alfred sold their company to Random House in 1960 but retained executive-level roles until their deaths in 1966 and 1984, respectively. In 2020, the publishing-industry veteran Reagan Arthur was named Knopf’s publisher, the first woman to hold that title at the firm.

[iv] Knopf, Alfred. “Dwig and the Borzoi,” in Portrait of a Publisher 1915–1965, vol. 2, ed. Paul Bennett. New York: The Typophiles, 1965, p. 121. Knopf’s homage to Dwiggins was originally published in Esquire in December 1959. See also Alfred A. Knopf, Inc. Records, Harry Ransom Center, Alfred Knopf’s unpublished memoir, 610:2, footnote on p. 104 in which Alfred identifies the illustrator as Bryn Strandannes, “an artist employed by Street Railways Advertising, a subsidiary of Barron Collier’s organization. I doubt that Mr. Strandannes was paid for his work by the new firm!”

The HRC holds the world’s most extensive consolidated archive of Alfred A. Knopf, Inc. records. In addition, the HRC has recently acquired the files of the late Peter Prescott, an American book critic who dedicated more than a decade to researching and drafting an ultimately unfinished biography of Alfred Knopf. Prescott’s work included conducting personal interviews with Alfred Knopf himself.

Before signing an agreement with Harry Huntt Ransom to make Texas the primary repository for the Knopf archive, Alfred Knopf contributed some seventy boxes of records to NYPL.

A boon for scholars of descriptive bibliography, the Tanselle Collection holds more than nine hundred Knopf volumes published between 1915 and 1930, many of them first printings.