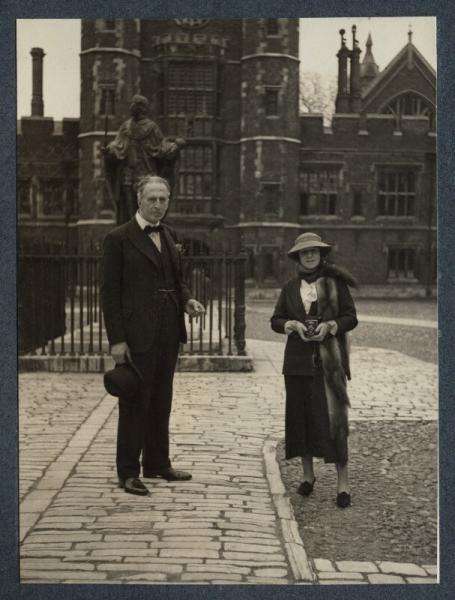 Made available with a Attribution-NonCommercial-NoDerivs 3.0 Unported licence https://creativecommons.org/licenses/by-nc-nd/3.0/legalcode

Hope (Helen) Mirrlees, poet, novelist, biographer and translator, was born April 8, 1887, at Erpingham near Chislehurst, Kent, the eldest child of William Julius Mirrlees and Emily Mirrlees (née Moncrieff). The Mirrlees’ had six children, only three of whom survived: Hope, William and Margaret (Briggs “Mirrlees”). During Hope’s childhood, her father was a wealthy sugar merchant with strong business interests in Britain and South Africa; due to the split nature of his work, she and her siblings grew up largely in Scotland, but stayed for extended periods of time in South Africa where she learned to speak Zulu (Briggs “Mirrlees”). Until age 11, Mirrlees was educated at home under a governess, but attended the Besires School as a boarder for formal education and later would attend St. Andrew Preparatory School and St. Leonard’s school, which is also located in St. Andrews, Scotland (Briggs “Mirrlees”). In 1907 Mirrlees was presented at court as a debutante, after which she briefly attended the Royal Academy of Dramatic Art at the influence of Mrs. Patrick Campbell. She soon found herself abandoning theatre and moving into the world of languages and study of classics at Cambridge (“Hope Mirrlees entry: Life Screen”).

Hope Mirrlees studied classics under the eminent scholar Jane Ellen Harrison at Newnham College, Cambridge. Thus began a long and complicated friendship, one that would not have happened if Mirrlees had accepted the marriage proposal that nearly convinced her to drop out of Cambridge (“Hope Mirrlees entry: Life Screen”). During her time at Cambridge, Mirrlees demonstrated a great skill with languages and developed her knowledge of French, Latin, and classical Greek; further languages she would later learn included Spanish, Arabic, Persian, and Icelandic (“Hope Mirrlees entry: Life Screen”). Soon after Mirrlees arrived at Newnham, she and Harrison began to develop a personal relationship, frequently corresponding through letters. Their correspondence was intimate and the two had their relationship described as “erotic but not sexual” (Swanwick). Mirrlees’ sexuality remains ambiguous; Mary Beard notes, “Mirrlees was talked about in ways that pointed to her homosexuality” (“Hope Mirrlees Entry: Life Screen”). The two lived together for three years in Paris staying at the American Women’s Club before returning to London in 1925. They co-published two translations in this time prior to Jane Harrison’s death on April 15, 1928 (Lloyd-Jones: Harrison, Jane Ellen). Mirrlees endeavoured to write a biography on her friend and mentor but it remains unfinished and unpublished (“Hope Mirrlees entry: Life & Writing Screen”).

Much of her work, however, did go to print. In addition to the two translations that Mirrlees completed with Harrison, she also published one biography, three novels, two sets of privately printed poems and finally three publicly printed poems (Kissane). Arguably, Mirrlees’ greatest literary achievement is her poem Paris: A Poem, a six-hundred-line modernist poem hand-printed and published by The Hogarth Press. It has been described as “‘a very obscure, indecent, and brilliant poem,’ full of allusions to politics, culture, race, and sex, even to Freud” (Briggs Virginia Woolf an Inner Life 72). Despite this praise, Paris was considered to be one of several volumes of forgotten poetry that the Woolf’s published (Willis 74). Paris gave Virginia Woolf trouble when it came time to print as Mirrlees had corrected the work during its typesetting. Woolf later had to hand correct 160 of 175 copies of the poem (Briggs 418). Paris would be the Hogarth Press’ fifth ever publication after T. S. Eliot’s Poems (Briggs “Mirrlees”). Paris was not the only piece by Mirrlees with which Virginia Woolf was associated; Woolf also wrote a review of Madeleine, One of Love’s Jansenists on October 9, 1919, entitled simply “Madeline” (Clark, Kirkpatrick 262).

It is uncertain as to when the Woolfs first met Mirrlees (Briggs 80), but they were considered friends in the eyes of Virginia Woolf. Woolf paints a vivid, yet contradictory, picture of the character of Mirrlees in her diaries. Woolf describes her as being “a very self conscious, wilful, prickly & perverse young woman, rather conspicuously well dressed & pretty, with a view of her about books & style, an aristocratic & conservative tendency in opinion, & a corresponding taste for the beautiful & elaborate in literature” (Diary 1: 258). Woolf reviewed Mirrlees’ novel and published Paris though she did not particularly enjoy Hope’s novels, writing in a letter that she “can't get an ounce of joy from them” (Letters 3: 164). Yet, she still calls Mirrlees an enthusiastic friend, considering her amongst her faithful literary ladies (Diary 2: 244).

Mirrlees and T.S. Eliot, both Hogarth Press writers, became close friends in the 1920s and were among some of the first authors to be published by the press (Briggs: ‘Modernism Lost Hope’ 80). During the Second World War Mirrlees and her mother moved to Shamley Green, where T.S. Eliot stayed with them for a time (Briggs “Mirrlees”). Eliot resided with them primarily on weekends (Kissane) while he wrote the third and fourth sections of his ambitious Four Quartets: Dry Salvages and Little Gidding. In 1948, Hope Mirrlees’ mother passed away and Mirrlees retired to the Cape of Good Hope, South Africa for the next fifteen years (Briggs “Mirrlees”).

Mirrlees returned to England in 1963 before her death in 1978. Hope Mirrlees passed away at Thames Bank, Goring on August 1, 1978. There were no obituaries, only remarks on the size of her estate (Briggs “Mirrlees”).

Orlando: Women' Writing in the British Isle from the Beginnings to Present. The Orlando Project, 2006. Web. 8 Jan. 2016.

Correspondence to Hope Mirrlees and her mother, Emily Moncrieff Mirrlees from T.S. Eliot – Held at the Theodore R. McKeldin Library of The University of Maryland

Mirrlees, Hope. A Fly in Amber, Being the Extravagant Biography of the Romantic Antiquary Sir Robert Bruce Cotton. London: Faber and Faber, 1962. Print. 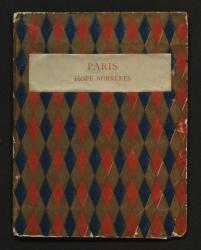