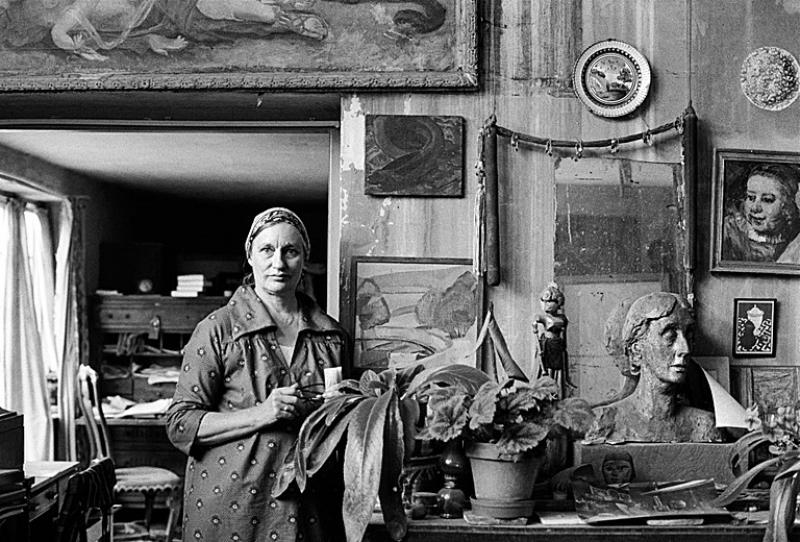 Angelica Vanessa Garnett (née Bell) was born on December 25th, 1918 in Charleston, Sussex and died on May 4th, 2012 in Aix-en-Provence. Named after Princess Angelica in William Makepeace Thackery’s The Rose and the Ring, Angelica acknowledged in her essay “My Parents: Vanessa Bell and Duncan Grant” that she was treated like a princess “in Vanessa’s world which like the Ring was a magical circle within which [Angelica] was the Rose: it was unimaginable to be anything but happy” (33). However, as the title of her memoir Deceived with Kindness[1] suggests, her Edenic childhood––the “precarious paradise”––concealed the complexities of her family relations, which she struggled to reconcile all her life (176).

Angelica recounted her peculiar family situation with difficulty in both Deceived with Kindness and The Eternal Moment. Her mother, Vanessa Bell (née Stephen), was married to Clive Bell, but both had other lovers. While Clive was in an affair with Mary Hutchinson (who was married to lawyer John Hutchinson), Vanessa, herself an artist, fell desperately in love with a painter six years her junior––Duncan Grant. Duncan was openly homosexual in the Bloomsbury Group, yet he was “not indifferent to female charm providing that its owner did not require him to be an adult,” which Vanessa never did (Garnett Eternal 25). Although he had other romantic partners at the time, Duncan began an intimate relationship with Vanessa, during which she was an undemanding lover. However, as Vanessa’s desire strengthened, Duncan declared that he could no longer copulate with her because his priority was painting, not human relations, which to him were peripheral. In 1918, at age 38, Vanessa became pregnant and attained what Angelica would later contemptuously characterize as a “pyrrhic” victory: Vanessa was able to keep “Duncan for herself,” but their partnership would be a purely aesthetic one.[2] When Angelica was born, Vanessa declared that Angelica’s father was Clive Bell, and only informed Angelica when she was 17 years old that her biological father was Duncan.

As she recounts her school days at Langford Grove in Deceived with Kindness, Angelica recalls being told by a classmate that she is illegitimate at age 10, and “a flash of clairvoyance” told her that her classmate was right (Garnett Deceived 89). However, Vanessa, like a child fearing chastisement, would not reveal the truth to her daughter until seven years later, upon which Angelica felt that an overdue “missing piece had been slotted into place” (134-5). Although Vanessa tried to assuage Angelica by calling her a “child of two fathers,” the name was a salve to Vanessa’s guilt rather than a reality for Angelica. Evasion and secrecy had poisoned her relationship with both Duncan and Clive: while the prior never tried to assume a paternal role, the latter performed the position with no conviction (136).

The absence of a father figure led Angelica to search for one, first in her brother Julian, and after his passing, in David (Bunny) Garnett. Many in her family opposed Angelica’s marriage to David, not only because David was 26 years older than her, but also because he was in a ménage-à-trois with Duncan and Vanessa at Charleston years preceding Angelica’s birth.[3] David had been Duncan’s boyfriend, and had also proposed to Vanessa but was rejected. Angelica believed that David’s statement, “I think of marrying it. When she is 20, I shall be 46––will it be scandalous?” (“Angelica Garnett”) at her cradle-side was not out of affection for her, but resentment toward Vanessa, the only outlet of which laid in “abducting her daughter” (Garnett Deceived 155) David’s vengeful “desire to assimilate one who had been a part of both Duncan and Vanessa” led him to court Angelica, who fell into the “grip of a personality a hundred times more powerful than [her] own” (144). Their marriage in 1942, when Angelica was just 24 years old, was the epitome of the return of Victorian social mores in the postwar period. Angelica forwent her “brilliant future” (156) to become the “perfect young mother-housewife-hostess” (161) of a manipulative Mr. Knightley. The Garnetts separated in 1967, after raising four daughters together: Amaryllis Virginia, Henrietta, Nerissa, and Frances.

Angelica moved to Ringmer and Cassis after her divorce but returned to Charleston in 1978 following Duncan’s death. She assisted with the restoration efforts of the Charleston Trust, which was established in 1980 to repair the deteriorating paintings and interior decorations of her home. Although Duncan and Vanessa perceived Charleston as “an experiment which would disintegrate with their own disappearance,” Angelica and the Trust intended to conserve the artworks and histories embedded in the house for the benefit of the public (Garnett “Earthly” 126). The Charleston Trust raised over £1,000,000 and opened its doors as a museum in 1986, in part thanks to Angelica’s fundraising lectures. She spoke to large audiences in Europe and America at the height of Bloomsbury-philia and captivated those who searched for Virginia in her voice (Levy). In addition to her speaking engagements, Angelica was a crucial adviser to the Charleston Trust on the reconstruction of fabrics and wall-paint. In “The Earthly Paradise,” a chapter in Quentin’s book on Charleston, Angelica reminisces about the contrast between the lemon-yellow beam and the ochre-yellow walls in Clive’s room as well as the salmon color for which Vanessa had a weakness (Garnett “Earthly” 132). Over the years, Angelica would also donate more than 8,000 sketches and drawings by Vanessa and Duncan to supplement the collection of the Charleston Trust (“Angelica Garnett: 25th December 1918”).

Angelica replicated her parents’ dedication to the visual arts. Exhibitions of her paintings and sculptures were held in Folcalquier, London, and Milan (Spalding “Garnett”). She published a manual on working with mosaics in 1967 and illustrated William Garnett’s book Morals from the Beastly World in 1958, the organic and innocent illustrations from which bear great resemblance to those of Henri Rousseau. She also acquired Virginia’s gift for words. Angelica’s writing style has been described by Constance Hunting as akin to that of Virginia: “intensely observant of the life around her and at once precise and luminous” (Garnett Eternal 137). Angelica wrote extensively on her childhood and the Bloomsbury Group. She published Deceived with Kindness: A Bloomsbury Childhood in 1984, The Eternal Moment in 1998, and The Unspoken Truth: A Quartet of Bloomsbury Stories in 2010. She was awarded the PEN Ackerley Prize for Deceived with Kindness in 1985 and received a monetary reward of £3,000. Her painfully honest memoir was a revelation for many readers; it rippled the smooth and unperturbable lake that was the Bloomsbury legend. Angelica also contributed biographical writings to Vanessa Bell’s Sketches in Pen and Ink and Quentin Bell’s Charleston: Past and Present.

Not only did Angelica share her aunt’s literary interests, but she also assisted Virginia with her work. Nine-year-old Angelica posed as the Russian Princess Sasha for the pictures Virginia supplied for Orlando, published on October 11th, 1928 (Willis 133). Angelica also recalled visiting the Woolfs’ home and being surrounded by a “rigorous world of machinery and accounts” with the Hogarth Press in the basement and the solicitors on the ground floor (Deceived 53). She remembered collecting Virginia from her writing-room in the basement, where “she sat by a tiny gas fire surrounded by a wall of books done up in brown paper parcels as though to shelter her from a bombardment” (53). Virginia tried to probe and loosen Angelica’s ideas: first through the conventional materialistic ploy of paying Angelica an annual dress allowance of £100 (Lee 634), then through giving her a copy of Mme. du Deffand’s letters and encouraging her to speak to the Rodmell Women’s Institute on performance arts (Garnett Deceived 114).

Each time they were together, Virginia prompted Angelica to play a make-believe game in which Angelica was Pixerina and Virginia was Witcherina. They fantasized about flying between houses and over trees and invented improbable stories about other family members (Marsha 138). During what would become the last conversation between Angelica and Virginia before Virginia’s death, Virginia asked with intensity, “Do you love me, Pixerina?” to which Angelica responded, “Of course I do, Virginia” (Garnett Deceived 151). Three days later, Angelica received the news that Virginia had drowned––in the river where Angelica remembered a dolphin had once tempted Virginia down to the bank to watch “its strange and lovely antics” (151). Dolphin was Virginia’s nickname for Vanessa (Spalding 136).

[1]Deceived with Kindness was published in 1984 in London by both Chatto & Windus and the Hogarth Press. Janet Malcolm of the New York Review of Books characterized Angelica as a “talented but untrained writer” whose self-knowledge was incomplete. Malcolm believes that Angelica, like other children of the celebrated, “can think of no better way of achieving an identity than to retail to a callous and indifferent world the intimate secrets of their families. Acting as posterity’s spies, rather than as characters in their own dramas, these oppressed and obsessed offspring write with the self-effacement of the biographer rather than with the egotism of the autobiographer.” Janet Malcolm, “What Maisie Didn’t Know,” The New York Review of Books, October 24, 1985, 181. https://www.nybooks.com/articles/1985/10/24/what-maisie-didnt-know/.

[2] Garnett writes, “[Vanessa] seems to have accepted it as a necessary sacrifice for the privilege of living with this immensely attractive yet incomplete human being, to whom she was so passionately attached, and there must have been a strong element of masochism in her love for him, which induced her to accept a situation which did permanent harm to her self-respect.” Garnett, “Nessa’s Death,” Deceived with Kindness, 164.

[3] Virginia Woolf writes in her diary on May 6th, 1940, “Pray God she may tire of that rusty surly slow old dog with his amorous ways & his primitive mind. […] A. off alone in love, passionately, with someone old eno' to be her father.”

–––. and William Garnett. Morals from the Beastly World. Rupert Hart-Davis, 1958.

Levy, Paul. “Angelica Garnett: Painter and Writer Who Grew Up in the Dysfunctional Bloomsbury Set.” The Independent, Independent Digital News and Media, 13 May 2012, www.independent.co.uk/news/obituaries/angelica-garnett-painter-and-write....

Reed, Christopher. A Room of Their Own - The Bloomsbury Artists in American Collections. Cornell University Press, 2008.