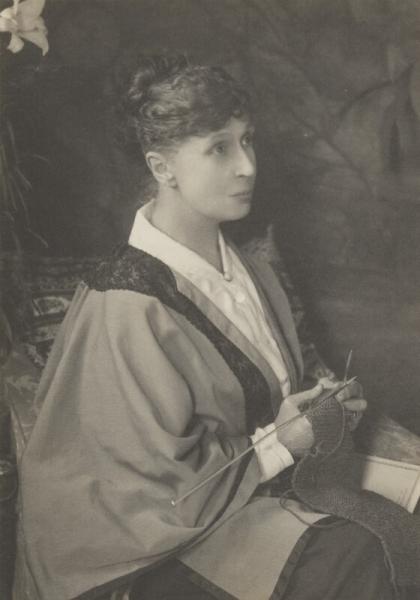 Alice Christiana Gertrude Meynell (née Thompson) was born near London but spent much of her childhood in Italy, where the Thompson family could live more cheaply than in England.[1] Her parents provided Alice and her sister Elizabeth with an informal but rigorous education that included contemporary literature and the poetry of Wordsworth, Tennyson, Keats, and Shelley. At age twenty, Alice was received into the Roman Catholic Church. Her conversion places her within the fin-de-siècle Catholic resurgence associated with diverse literary figures including Francis Thompson, Lionel Johnson, Michael Field (Katharine Bradley and Edith Cooper), Oscar Wilde, and Coventry Patmore.

Her first book of poems, Preludes, appeared in 1875 and was positively received—though she would attribute this to the illustrations provided by her already well-known sister, Elizabeth Thompson, who would go on to paint the celebrated military scene of the Crimean War, The Roll Call.[2] In 1877 she married Wilfrid Meynell, a journalist and fellow Catholic convert, and settled in Kensington. Alice Meynell quickly became involved in the burgeoning English Catholic periodical press. She and Wilfrid wrote prolifically to support their family, which grew to include seven children (an eighth died at three months). In 1881, Wilfrid was appointed by Cardinal Manning as editor of the Catholic Weekly Register, a post he held until 1899—with Alice serving as the de facto co-editor for considerable stretches. In 1883, the Meynells launched their own literary journal, Merry England, editing and contributing to it for over a decade.[3] Merry England, published like many of Meynell’s essay and poetry collections by the British Roman-Catholic publisher Burns and Oates, “saw itself as promoting a renewed national spirit with the Catholic church as a central social institution” (Thomas 102). It accepted contributions from Catholics, including Coventry Patmore, Aubrey de Vere, Katharine Tynan, and Francis Thompson (who the Meynells discovered and supported in his recovery from an opium addiction), as well as non-Catholics, including William Morris, W. H. Hudson, and Andrew Lang. Meynell also produced many collected editions featuring critical introductions on authors ranging from Christina Rossetti to Ruskin, including several of the anthologies in Blackie and Son’s Red Letter Library series.

During the years in which she was primarily occupied by editorial work, Meynell wrote little poetry but penned countless articles for the periodical press, including The World, The Spectator, the Scots Observer (which became the National Observer), and The Saturday Review, among others. Her journalistic activity involved her in the Society of Women Journalists, for which she served a term as President. A founding member of the Catholic Women’s Suffrage Society, Meynell also wrote for its newspaper, The Catholic Suffragist, and was elected vice-president of the Women Writers’ Suffrage League. She was assigned to the “The Wares of Autolycus” column in the Pall Mall Gazette, which Talia Schaffer observes was “reserved for the most eminent women writers,” giving her access to an elite and influential readership, not limited to women (47). Meynell published selections of her essays in collected volumes, beginning with The Rhythm of Life and Other Essays (1893), and followed by The Colour of Life and Other Essays on Things Seen and Heard (1896), The Children (1896), The Spirit of Place and Other Essays (1898), and Ceres’ Runaway and Other Essays.[4] The more permanent form of the bound essay collection detached Meynell’s essays from the ephemeral status of their periodical publication, presenting them instead in a form designed for rereading and close attention. Many of these collections were popular as well as critical successes, and went into several editions.

As Gillian Thomas observes, “Meynell was frequently singled out by male critics as being exempt from the usual failings of her sex. … She was the only female literary critic whose authority matched that of Lang or Gosse and was credited with having mastered ‘the masculine art of essay-writing’” (101). Her prose was lauded as setting a new standard, and her essays enjoyed what is represented in contemporary commentary as a kind of cult following: Beerbohm satirically, and with a barely concealed jealousy, wrote that he suspected her column would become a “substitute for the English sabbath” (Badeni 141). As well as being an arbiter of literary taste through her reviews and anthology introductions, Meynell was also recognized as an important poet; she was twice proposed for the laureateship, first following Tennyson’s death in 1892, and again following Alfred Austin’s in 1913. During the First World War, her poetic activity surged again, leading to the 1917 publication of A Father of Women, and Other Poems, which included several wartime poems.

If it seems strange that the warm appreciation of Meynell’s writing should have cooled so much in the intervening years—Schaffer is right to count her among the “forgotten female aesthetes” of the fin-de-siècle—this critical neglect is due to a number of contributing factors. Meynell continued writing well into the twentieth century, and the periodization of literary studies leaves her uneasily astride the Victorian period and the rise of modernism. Her challenge to periodization is further complicated by her gender. As LeeAnne Richardson notes, recent examinations of the field of Victorian poetry have drawn attention to “the failure of current critical categories to account for late-century poetic production, and more specifically late-century women’s poetry” (82); the failure is still more apparent and, arguably, persistent in the case of Meynell’s essays, as an ostensibly masculine form. From the other side of the century divide, as Schaffer has argued, Meynell’s erasure from the twentieth-century critical landscape was at least partly due to the lasting influence of Virginia Woolf, who found in Meynell “an emblem of everything against which she was rebelling” (190). Later, as Schaffer points out, Woolf would “exclude Meynell” from her own history of women writers, A Room of One’s Own (194). Particularly odious to Woolf would have been Meynell’s commitment to her Catholic beliefs. Following T.S. Eliot’s conversion to Anglicanism, Woolf was famously scandalized: “A corpse would seem to me more credible than he is. I mean, there’s something obscene in a living person sitting by the fire and believing in God” (Letters III: 457-58). Meynell she described as a “crucified saint” (Diary 3.250), a comparison that suggests Woolf’s disdain both for the reverence that accrued to Meynell as a “saint of women” and also for Catholicism with its veneration of saints. Meynell’s religious convictions may have also been a stumbling block to subsequent literary critics.[5] Only quite recently have literary scholars begun the important work of recovering Alice Meynell as a significant figure in late-nineteenth and early-twentieth century writing and publishing, whose work merits continuing attention.

Note: This biography has been adapted from my dissertation, Doubtful Forms: Uncertain Belief in Victorian Women’s Writing (2020).

[1] This is the motivation Meynell’s daughter Viola records in her biography of Alice Meynell (Meynell 26-27).

[2] Calling the Roll After An Engagement, Crimea, as it is officially titled, was exhibited at the Royal Academy and purchased by Queen Victoria.

[4] Other prose projects included London Impressions (1898), which the subtitle advertises as “Etchings and Pictures in Photogravure by William Hyde” accompanied by “Essays by Alice Meynell”; Mary the Mother of Jesus: An Essay (1912), a long essay that illuminates Meynell’s Catholic thought; Essays (1914), mainly consisting of essays drawn from the previously published collections and grouped into categories; Hearts of Controversy (1917), a topically focused collection devoted to literary history which Virginia Woolf reviewed for The Times Literary Supplement; and The Second Person Singular and Other Essays (1921), which published a selection of Meynell’s periodical essays posthumously.

[5] As Mark Knight and Emma Mason observe, while some critics dismiss the Catholicism of the Decadents “as a mere pose,” others read away the religious dimensions of their texts as “merely a symptom of more profound intellectual and cultural forces, such as sexuality, aestheticism, and symbolism” (191).

Gray, F. Elizabeth. “Alice Meynell, Literary Reviewing, and the Cultivation of Scorn.” Women in Journalism at the Fin de Siècle: Making a Name for Herself, edited by F. Elizabeth Gray, Palgrave MacMillan, 2012, pp. 84- .

Butler, Elizabeth. An Autobiography: With Illustrations from Sketches by the Author. Constable and Co., 1922.

Knight, Mark, and Emma Mason. “Catholicism and Mysticism: Huysmans to Chesterton.” Nineteenth-Century Religion and Literature: An Introduction, Oxford UP, 2006, pp. 189-216.

Meynell, Alice. Ceres’ Runaway and Other Essays. Constable and Co., 1909.

Meynell, Alice. The Colour of Life and Other Essays on Things Seen and Heard. John Lane, 1896.

Meynell, Alice. A Father of Women, And Other Poems. Burns and Oates, 1917.

Meynell, Alice. The Poor Sisters of Nazareth: An Illustrated Record of Life at Nazareth House, Hammersmith. Illustrated by George Lambert, Burns and Oates, 1889.

Meynell, Alice. The Rhythm of Life and Other Essays. E. Matthews and John Lane, 1893.

Meynell, Alice. The Second Person Singular and Other Essays. Humphrey Milford, Oxford UP, 1921.

Meynell, Alice. The Spirit of Place and Other Essays. John Lane, 1898.