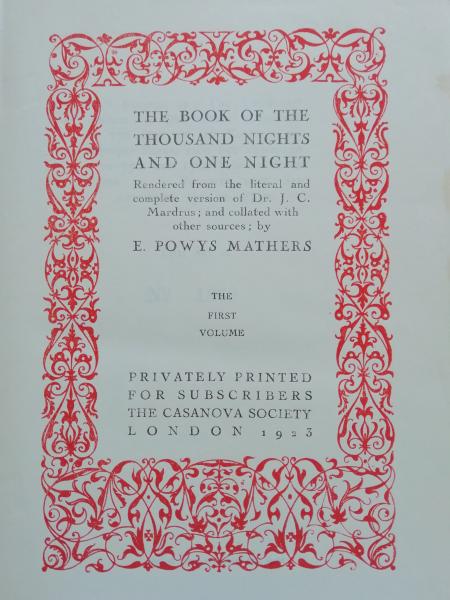 Title page of The Book of the Thousand Nights and One Night, volume 1

The Casanova Society originally arose out of a joint business venture between the modernist writer and publisher John Rodker and the rare bookdealer Joseph Irving Davis. Established in 1922, the Society’s primary purpose was the private publication of a luxurious reprint edition of the twelve-volume Memoirs of Giacomo Casanova di Seingalt, first issued by the notorious publishers of erotic literature Leonard Smithers and Harry Sidney Nichols in 1894. John Rodker, the creative force behind the venture, was a self-taught working class poet hailing from London’s Jewish East End who had become associated with the literary circles around the magazine The Egoist in 1914. Before embarking on the Casanova project with Davis, Rodker had already made a short-lived attempt at running his own publishing business with the Ovid Press, a modernist small press that published work by Ezra Pound, T. S. Eliot and Wyndham Lewis between 1919 and 1920. Davis, meanwhile, was an experienced bookdealer and co-owner of the Davis & Orioli bookshops in London and Florence. Together with his business partner Giuseppe ‘Pino’ Orioli (who later came to prominence as the first publisher of D. H. Lawrence’s Lady Chatterley’s Lover), Davis traded in old and rare books including some early printed texts, modern first editions and a small selection of French and Italian erotica. In 1922, Davis purchased a set of the original 1894 edition of The Memoirs of Casanova for the price of £30 and signed an agreement with Rodker who undertook to produce a luxurious reprint edition of the text under the imprint of the ‘Casanova Society’.

The reprint edition was to be limited to 1000 sets selling at £19 and 10s. per set and profits were to be shared between the partners, with a third going to Davis and two thirds to Rodker. As their agreement constituted a partnership in the reprint venture alone and not in the Casanova Society as a publishing company, Rodker was solely liable for any debts incurred by the Society and thus bore almost the entire financial risk. Later Rodker shared this responsibility with his lover Florence Mary Hare Price, known as ‘Matty’, who lived in a small flat above the Society’s offices at 4 Took’s Court, Holborn. Price became an official co-manager of the Casanova Society in July 1923. The necessary starting capital for the Memoirs of Casanova project was loaned to Rodker by his friend and patron André Germain, a French man of letters and heir to the Crédit Lyonnais banking empire, and a wealthy barrister by the name of W. H. Cartwright Sharp. Projecting a profit of £7,000 for the first year of the business, Rodker had reason to hope that the undertaking would be a successful one. The expected sales, however, failed to materialise, and when Davis decided to divest himself of his share in the venture in January 1923, Rodker had to borrow additional money to buy him out. The publication of all twelve volumes of the Memoirs of Casanova in a handsome edition printed on hand-made, watermarked paper with gilt top edges and a quarter parchment binding was completed in spring 1923. Faced with an acute cash-flow problem and rapidly mounting debts, however, Rodker increasingly came to resent his original partnership with Davis which he felt had been overwhelmingly to his disadvantage.

In a desperate bid to save the Casanova Society from bankruptcy, Rodker borrowed a further £1,000 from Germain to invest in the publication of a second monumental project: a sixteen-volume edition of the Arabian Nights, translated from a French version by the poet Edward Powys Mathers and limited to 2250 sets. This edition, published in 1923-24, received favourable reviews in newspapers including The Times Literary Supplement and the Spectator but sales remained slow. In May-June 1923, Rodker went on a business trip to the United States to try and tap into the much larger American market. Hoping to sell sheets of both The Memoirs of Casanova and Arabian Nights, Rodker set up several promising meetings with firms including Boni & Liveright, Huebsch, and Macmillan. The American publishers, however, showed little interest in the Society’s racy publications and so Rodker returned to London empty-handed.

Following the two financially disastrous multi-volume series, the Casanova Society issued several smaller publications between 1924 and 1925. This included some spin-offs from the Memoirs of Casanova and Arabian Nights series, such as Casanova’s Escape from the Leads and Sung to Shahryar, and shorter complete works, including The Testaments of François Villon, Ned Ward’s London Spy and Rodker’s own translation of Les Chants de Maldoror by the Comte de Lautréamont. These smaller publications, however, did little to improve the Society’s desperate financial situation. Taking stock in April 1924, Rodker estimated that he had around £20,000 tied up in unsold books and unbound sheets of which almost £19,000 related to The Memoirs of Casanova and Arabian Nights. His relationship with his partner Matty Price – from whom he had been hiding clandestine love affairs with the dancer Dorothy Varda and the writer Nancy Cunard – also deteriorated increasingly and in November 1924, she resigned her position as co-manager. In early 1925, Rodker made one final attempt to save the Society by turning it into a limited company but his main creditor Cartwright Sharp blocked this scheme. Seeing no other way to clear his debts, Rodker was eventually forced to sell the business.

In February 1925, Rodker struck a deal with Routledge, which took over the Casanova Society imprint together with its catalogue of titles and unsold stock for a sum of around £6,000 – a price which Rodker considered to be pitifully low. Fredric Warburg, a junior partner in Routledge at the time, remembered the takeover as ‘l’Affaire Casanova [...], a bitter-sweet episode which made a deep mark on my publishing mind’ (Warburg 106). Specifically, Warburg describes how Routledge’s managing director William Stallybrass became suddenly terrified by the idea of having obscenity charges brought against him and remaindered the Memoirs of Casanova series almost as soon as he had bought it. This added insult to injury for Rodker who now had to see his luxury reprints being hawked around as cheap smut. Despite Stallybrass’s initial act of panic, Routledge later went on to publish three more titles under the Casanova Society imprint, including a translation of Remy de Gourmont’s Physique de l’amour by Ezra Pound.

The Casanova Society ceased publication in 1926, but it nevertheless left a permanent mark on Rodker’s reputation. In the 1930 novel The Apes of God, Rodker’s former friend and collaborator Wyndham Lewis viciously caricatured him as a dubious dealer in ‘highbrow’ pornography who makes his money ‘on the limited-edition-ramp by printing in white-calf of the Eighteenth Century literature of gallantry’ (Lewis 161). Within the publishing profession, Rodker came to be regarded as equally notorious. As one colleague, the publisher Fredric Warburg, pithily put it: ‘Certainly, if this country had wished to create a new governmental post in a Ministry of Entertainment, Rodker would have had my vote as Pornographer Royal’ (Warburg 106).